I have been living in our little village Uhuru in Western Kenya for almost three months and what I can say now; it is all about how you make the most out of it! You have to be self-confident, go out there, want to change something, want to actively and openly working together with the farmers. Be proactive, be bold, be curious and be innovative and always be open for change, for something new and for the unexpected! You cannot and you do not really plan a day in Kenya. It is dependent on so many factors but the locals say, if God wants it wants it to happen, it will happen! I am still having a different mentality, first of all I do not relate it to religion because everyone is accountable for their own actions, I firmly believe, and being German and having lived in Denmark for the past three years, makes me appreciating efficiency and time-management! I am still struggling with the Kenyan perception of time and being on time or rather not being on time. Everything here is “pole, pole”, (Swahili for slowly, slowly). On the other hand it allows you to slow down more once in a while, coming from a society where everything has to be faster, bigger, wider… 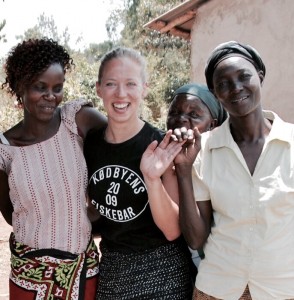 But what is it that I am actually doing here all day? First of all, no day is alike but that is what I appreciate and value in particular! Half of the time I would be in the office doing some administrative work and the other half we are out in the fields to train, monitor, supervise our farmers.

Let me go back in time and share my first day of work in the field with you. It was already an adventure in itself and a great start! I was going around on a boda boda (motorbike) with my colleagues Kevin and Eunice, so three persons squeezed together, driving through the beautiful, splendid and wide nature of Western Kenya, which is very green and fertile! We were going around following up on some overdue loan installments. So I was able to see a lot of the nature, the farms, getting to know my colleagues better and of course also our dear farmers. What I liked especially about it was the positive atmosphere that was predominant the whole time! The farmers welcomed us smiling, we were offered some of their crops such as plums, avocados, mangos and grilled maize – by then I was already in heaven. Even though we were there to collect some money from them, the atmosphere was at no time pressured or distrustful. Even though I could not understand everything, due to the language barrier of the Luo language, I could very well read the body languages and mimics, which was such a beautiful and precious thing to experience! I could really see how the relationship with our farmers is based on trust but of course we are not named Momentum TRUST without a reason! I was glad to sense this positive atmosphere because often you hear about Microfinance institutions pressuring their members too much and creating hostile environments. Luckily, this is not the case for Momentum otherwise I would also not have liked working for them. But because I met Christian already a while ago before actually moving to Kenya and I have met Mia, a former intern and now board member, in person too, I already knew before what a valuable project this is. I was sure I WANT TO BECOME PART OF THIS and I have never regretted my decision a single second (ok maybe very shortly during one of those nights were I was attacked by too many mosquitoes, despite my mosquito net…), my expectations were exceeded tremendously.

Coming back to my first day of work where we moved around to follow up loans, there was this one female farmer who was overdue but just not able to pay back even a little. So Eunice and Kevin were

discussing possibilities back and forth and also trying to understand why she is not able to payback to be able to better help her. In the end, my colleague Eunice bought one of her chickens for herself and thereby repaid part of her loan. So… it was not only three persons on a boda boda together, no now we were three plus a chicken, and trust me, commuting like this is not an unnatural thing here. This already put such a big smile on my face and this deep feeling that evolves from the inside and makes you so unbelievable happy without even being able to find words for it.

On my second day of work I was taken to a training on group dynamics with Eunice! She is an incredible woman, delivering so much enthusiasm and knowledge to our farmers and I can feel and see their prosperous relationship of trust and mutual respect! It was a training for a new group and in the introduction round everyone was asked to share what makes them happy in life and what makes them sad. Every single person in the group of 14 people answered “I like to work hard to make sure we have enough food because I do not like to not be able to feed my family.” And it was my turn and you are speechless because you are struggling what to answer. My kind of “first world problems” cannot be put in any perspective with the people’s life’s here. It made me thoughtful, it made me grateful but it was also the beginning of feeling more and more disgust about our western society being exposed to this mass consume, the over supply of goods, the food waste we create while others are struggling to feed their families.

There are so many things that fulfill me, that enrich me, that nourish this deep happiness inside me. It is the encounter with the people, meeting especially the female farmers, starting to bond with them, sharing experiences and thoughts with them, personally witnessing personally the positive impact we are creating, being part of this amazing team down here, moving around with my colleagues on the boda boda from farmers group to farmers group. In general I love those motorbike rides with my colleagues, it is almost cosy, you enjoy the sun and wind in your face while you are talking about literally everything with them. In general Kenyans are very open about their culture, religion and social issues. Whenever I can I am trying to ask as many questions as possible starting at polygamy (a totally alien topic to me personally) to women rights and their standing in society. So many things are very different from what I am used to especially private and social issues but I am trying to understand their way of living and their society better. However, in general I must say that the Kenyan women and especially our female farmers have become my focus of attention. But I feel they need a focus of attention, they need to be empowered, become independent, to be supported, promoted and lifted from their difficult standing in society. But this will be a blog entry by itself because it is a vast topic!

The work at Momentum fulfills me a lot, so I actually started fearing to return to my life back home, into a life of pure office work, inside all the time… Will it fulfill me as much? Give as much meaning to me, create as much impact? I have tried to put those thoughts to the side again, fully embrace the NOW and to grasp every single second here. Here at Momentum you become part of a great team, you are seen as an equal part of the team, you have a lot of responsibilities but also flexibility in terms of creating your own tasks. We are a great team together, “growing together” – which is our motto for Momentum – as a team but also with our farmer. Personally I also do believe in the wisdom of an African proverb, I recently learnt, which says: “If you want to go fast, go alone but if you want to go far, go together”.

Of course you have to put all your engagement and focus into the project, it is not for a certain product you are working, you are dealing with human kind here every day! And they are so dependent on us, they do trust in us and we have to deliver our trainings, knowledge sharing and farming inputs to them properly and in time. This can stressful during the days of farm inputs distribution and the days leading up to it, it entails a lot of planning and we are responsible for so many lives – in this season for 718 farmers. Thereby you have a certain burden on your “shoulders”, we know, we as Momentum are responsible that the farmers in the long term have enough food on the table and can pay the school fees for their kids, those kids that are our future! You can see it as a burden and to be honest, I have had some restless nights but you can also start seeing it as a possibility, as a gift, to actually make a change happen! I am thankful to be part of this project, I believe there are enough organizations, having a positive cause on their agenda but instead of actually creating a positive impact, they are just wasting money or putting too much money in charity! Charity is not the long term solution! The inhabitants of underdeveloped regions have to be trained and empowered. A strategic fit with their possibilities and surroundings has to be identified and supported to enhance their living standards! They need to become independent and not dependent on charitable deeds!

Read our Annual Report from 2104 here. The report is made by PWC and is in Danish.